The origins of Macaroni and Cheese and Thomas Jefferson

In honor of Presidents Day – we decided to share a little bit of presidential food lore – according to food legend Macaroni and cheese was popularized in America by none other than Thomas Jefferson. Of course, macaroni and cheese, or as it was known then (simply as Macaroni) was very different than its modern-day counterpart, and consisted with pasta layered with butter and cheese. Jefferson didn’t invent Macaroni and Cheese, as similar recipes were already known in Europe, but he was one of the dish’s popularizers in the United States after he first sampled it in Europe. There is actually a historical record for Thomas Jefferson’s foodie discovery, he was fond of pasta and even requested a pasta machine from Europe, which was listed in his list of possessions moved from Philadelphia to Monticello, and he certainly served Macaroni at official functions. Macaroni and cheese is purported to have been served by Jefferson as early as 1802, and it appeared in the 1824 Virginia Housewife cookbook, recipe adapted here. So for helping to bring Macaroni and Cheese to the USA, we say, thank you Thomas Jefferson!

Recipe for Macaroni and Cheese from the Virginia Housewife Cookbook, 1824

Happy Valentine’s Day! Why not celebrate with some of these vintage food-related Valentines from the Vintage Valentine Museum: here are their collections of food-related cards and anthropomorphized food cards. For some more fun, here is an assortment of tea related cards from Tea with Friends.

The Renaissance of the French Baguette 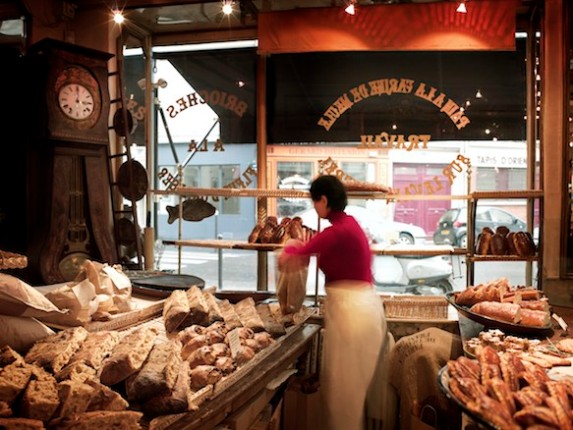 When one thinks of French bread, artistry, tradition and quality probably come to mind. However, we were very surprised to learn that in Post War France, quality bread was hard to come by. Quelle horreur! Afar Magazine has a fascinating article about the fall and rise of bread in France, and how the writer apprentices with one of the current arbiters of the artisanal bread tradition.

In 1987 a cultural critic writing in the French newsmagazine Le Nouvel Observateur proclaimed that the baguette had become “horribly disgusting.” It was “bloated, hollow, dead white,” he said. “Soggy or else stiff. Its crusts come off in sheets like diseased skin.” Renowned French baking professor Raymond Calvel mused that the best baguette might soon be made in Tokyo. What had brought this on? And how was quality bread revived in the 1990s? The answers to these questions lay in Paris, which is what brought me to the door of Boulangerie Arnaud Delmontel at three that morning last February.

It’s pretty amazing to look at historical menus, both for the prices and the actual menu items (how times have changed!). The  LA Public Library and the New York Public Library both an extensive selection of old menus. There are even a few from Chicago, including an intriguing ad for the Chicago Chop Suey Parlor from the 1940s and a menu for the (relatively) recently-closed Barney’s Market Club.