It’s almost time for the Mid-Autumn Festival in China and Vietnam (September 15 this year), which means one thing – mooncakes (yue bing)! Mooncakes are round, molded pastry cakes with dense fillings, and have been eaten in conjunction with the Mid-Autumn Festival since the Ming Dynasty. Mooncakes, as befits their name, are said to represent the moon, and are traditionally imprinted with the Chinese characters for longevity or harmony. Mooncakes are made with pastry crust and are traditionally filled with red bean or lotus paste with whole egg yolks, but the fillings vary wildly, depending on location. You can buy pre-made mooncakes with countless crust and filling types at most Asian grocery stores or bakeries (and even more elaborate varieties if you are in Hong Kong), but you can also make them on your own! Andew Gooi has a lovely video of how mooncakes are made, which you can see below.

Mooncakes are traditionally shaped with wooden molds, but you can also find some plastic or silicone (round or square) online. Making mooncakes is a multi-step process and may require some special ingredients from a well-stocked Asian grocery, like golden syrup, which you can also make on your own. China Sichuan Food and House of Annie have recipes for a traditional Cantonese version with egg yolk and red bean filling. Serious Eats has a recipe without the egg yolk. If you are feeling lost, Omnivore’s Cookbook has an extremely comprehensive recipe and step-by-step guide for the mooncake newbie newbie. If you are in the mood for something avant-garde, Christine has a recipe for for the more modern green tea custard or pandan snow skin mooncakes. 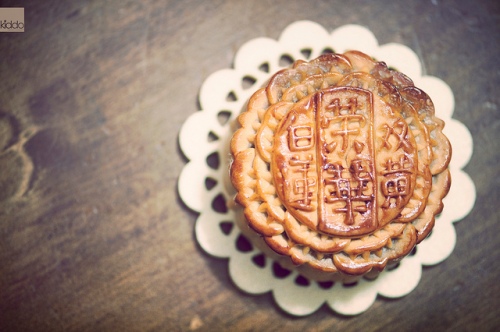